Post details of flyers you are looking for in here
Forum rules
1) If you choose to trade with another member you do so at your own risk. If money is changing hands then the transaction should be completed through either eBay or Paypal for your protection.
2) This site takes no responsibilty for flyers traded between members
Post Reply
9 posts • Page 1 of 1

Had it tattooed on my back

Looks similar to a cryptonite design from late '91!!! Could be wrong though
Top

Tim wrote:Looks similar to a cryptonite design from late '91!!! Could be wrong though

I thought this was spam but realised Tim you're right. The design was used on a Cryptonite flyer. That's it! Tim you da man. Flyer expert. Now, how do I get one?
Top

Iggy wrote:That's it! Tim you da man. Flyer expert. Now, how do I get one?

There is one already listed on eBay by one of the main sellers (rave cave). See below eBay link

Bought it. Thanks for your help!
Top

This dismays me for a number of reasons!!
Firstly, it's my artwork, which was done for Cryptonite in the 90s and not only was the printing of the flyers really dire, my Cryptonite contact stole this and two other artwork originals!!
Secondly that's a fricken' dreadful tattoo, perpetrated by some hopeless scratcher. I did some training as a tattooist a few years back but never took it up (I am a professional illustrator) and though I only did 6 months training I was already far better than that!!
A restored version of this art can be found at http://www.tonyhough.co.uk/Colour/Large/19Flu.htm 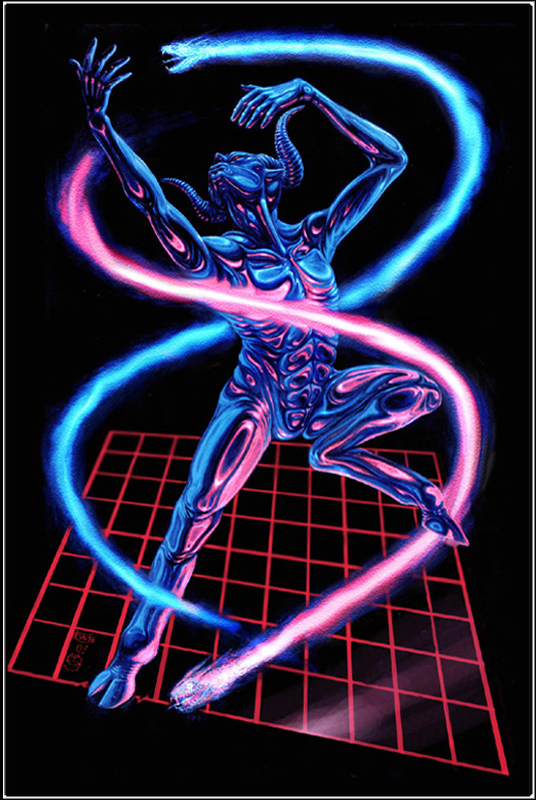 Could you let me know the origin of the tattoo photo? Would like to know who did it to whom, and with what!
Was either party proud of the result? [comment removed by Admin]
Top

The user Iggy posted it directly and from what he mentions in his post it's on his back.

I guess the fact he has posted it, means he was happy with the result.

Appreciate you don't like the tattoo, but guess your art on the flyer made an impact on him, so much so that he wanted a tattoo of it, and lets face it the ink is 20 odd years old now, so may look a fair bit different from when first applied?

Great art by the way, I never went to the Cryptonite rave,but remember the flyers at the time and nightmare that you lost your original art as well.

Edit - I've removed your last comment in the previous post.. which is actually the first time since the forum was set up in 2009 I have felt the need to do that to any post.